After finishing writing the previous article(The Art Make You Aware of the Box in You.), I just sat there for a long time. Watching the last picture of the house about to fall, I seemed to realize that the house was falling to the ground and crushing into pieces. It was like a video playing right in front of me. Suddenly, it hit me, I got the message and my heart started to pound. Oh. God, why didn’t I see that box before, then, the house would not have fallen and my husband might have been saved. My thought quickly turned to the past.

The clock rewound back many years ago. One night my husband, who worked at Genetic Department at University, got the notice that the whole department would be closed; it was because the laboratory could no longer receive any more patients’ specimen.  Lacking the funding and money provided by the patient services, the lab has no choice but to close down. As many people were speculating, maybe the department was lacking a community liaison to get the patients in for services.

My husband was in charge of the laboratory. After getting the blood from patients, the technicians treated and analyzed the specimens. My husband then summarized the conclusion and passed the results to a doctor so he could give advice to patients. He was not involved in public relation work. So there wasn’t anything that he could do, all the more, he felt helpless.

My husband took the news of the lab closing hard.  Being in that box for so long, he did not know how to get out. Actually, he was constrained by the bondage of box. He felt there was no way out. Worrying about not being able to support the kids and family, he was depressed and not much longer he was diagnosed with cancer. In order to release his pressure, I rushed to find a job that was incredibly far away from my home. I had to spend three hours in traveling back and forth from home to the job site.

I, too, was trapped in this narrow mind of thinking. At that moment, I thought by making money I could solve the problem, but I wasn’t focus on the bigger picture. In the end, he was so ill that I had to quit my job to stay at home to care for him.

Quitting my exhausting job, I have time to research ways to help get him out of this circumstance. I went to the library and found an answer from the books. I learned that his illness came with his mental block, which was the box that stopped him from finding the way out of this unpleasant situation. We kept our hope up and changed our mentality, being especially positive. We also practiced the method suggested by one of Tony Robbins’ books- to laugh five times a day and one minute each. It seemed to work and he was getting better. We thought he would recover without a doubt. Unfortunately, the hospital decided to make him undergo surgery right after chemotherapy. It was too soon to have the operation; he did not recover afterwards. A month later, he passed away.

After his passing, I went to his office to clean up for him. I finally realized that he had been in this box for too long. It was more than fifteen years, and we did not notice it. There were no windows in his office; it was rather unpleasant to be there. I was so sorry that I did not pay attention to his surroundings while he was alive. The most terrible thing happened to him, I believed, was to face the rooms of lab being taken away one after another by different departments after the announcement of closing his department. What an emotional stress that he had to go through. After finishing cleaning up his stuff, I sat down quietly and ultimately I found the basic problem –the stress that led to cancer was from not being able to get out of this box.

Recalling the past, we were unaware of the existence of this box. No matter how regretful we are for our ignorance, we cannot call my husband back.  After learning the hard way, I can only hope that I will be more alert about the presence of the box. I know that we will face the sky that is boundary less and full of hope once we get out of box. Next Have a Laugh 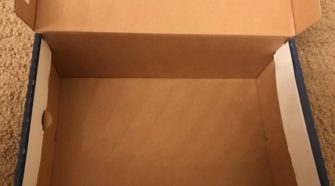