The world is constantly changing, life is unpredictable and science does not provide all the answers. Massachusetts Institute of Technology is lit round the clock; researchers do experiments in their laboratories day and night. They gather and analyze data, then give us scientific theories. But science cannot give us answers to questions like these: Who are you? What do you want? How are you feeling? What is the purpose of life?

When I suddenly lost both my father and my husband, I struggled to survive these enormous blows. At the same time, the impermanence of life affected friends who either already had their Ph.D. degrees or were still working to get them. They began to think about the value of life, and some of them started thinking outside the box.

Here’s an example. Other two families and I decided to set up a stall at a flea market. Because most customers were not Asians, we sold their favorites: fried noodles and spring rolls. We shared responsibilities. I was in charge of vegetables, including bean sprouts. Thanks to our success in selling thousands of spring rolls, we needed lots of bean sprouts. My kitchen was not big enough, so I used a big laboratory autoclave, which could cook a lot of bean sprouts in just a few minutes.

You would probably be surprised to have seen us there in the flea market. We’d remove our lab coats, roll up our sleeves and begin yelling and shouting to bring in customers. Don’t belittle us; we did a tremendous business because people loved our food. It was a pity that we could not continue because we had to go back to the lab to continue our research. It was a memorable moment in our life’s journey though. That was the first time we got out of habitual thought and did something different.

When my husband passed away, I thought my life would become simpler. I imagined I could focus on raising my children and earn a living to support them. I never imagined there would be problems in being a single mother.

A colleague suggested that I see a psychiatrist to help me cope with my loss. So I went to see one of the psychiatrists at MIT. He was friendly and appeared to be a gentleman. After the first couple of meetings, he suggested that we meet at a restaurant. After a few times, I grew uneasy having appointments outside his office. I also gradually realized that he had very strong opinions about the men I knew. He put down every single one of them, saying either that they were not good enough, or that they did not publish papers in first-rank scientific journals. I felt that he had an impure motive, forgetting that as a psychiatrist he was supposed to be helping me. It was a shame he was blinded by his own desires and forsook his professional responsibilities. So I stopped seeing him.

I found it quite challenging being a single woman. I remember how an MIT researcher once invited me to dinner. Afterward, when he dropped me off at home, he asked for a cup of coffee. It seemed innocent, so I let him come in. But before I could prepare the coffee, I needed to get my daughter to bed so she could get up in time for school the next day. When I came out of her room, he came close to me. I was shocked and stopped him. He didn’t like my reaction and told me that I’d given him a hint that I’d be receptive because I’d put my daughter to bed, which left us alone together. What kind logic is that? I not only shooed him out, but told him that I would not see him anymore. I believe that relationships need to be based on a certain degree of mutual respect.

One incident in particular hurt me a great deal. It gave me a glimpse of the ugly side of human nature. How I wish it had never taken place. It made me lose trust in someone I had previously respected – the husband of a distant relative who had come to Boston for a meeting. After we returned from dinner, he tried to kiss me as we chatted in my living room. Shocked and terrified, I rushed to my room and locked the door. In the grip of fear and distrust, I frantically took all the boxes I could find and stacked them against the door to keep him from coming in. I had thought of him as a nice person, a friend without ulterior motive. In fact, he had helped arrange my husband’s funeral and had delivered a eulogy, which had given me a great deal of respect and appreciation for him. Now, he had shattered his perfect image right before my eyes. It made me sad. I knew he was ashamed, and he left right away. I never told his wife about the incident, hoping he would be loyal and faithful to her for the rest of his life and that he would keep his family intact.

People don’t come into our life by chance, even ones like these who appeared like dragonflies, just touching the water, then flying away without leaving a trace. Still, these incidents gave me a lesson in life. How we hope there are always perfect endings as we go through life’s journey. But now, I’ve learned that life takes unexpected turns, and is constantly changing. We need to accept things as they happen and make the best of every situation. We cannot change others, so we must change ourselves to live a life that we can be proud of and that makes us happy.

Previous My Life Story (1)- A Rose That Cannot Be Crushed

Next My Life Story (3): Suicide and Empathy

Life is a Journey, not a Race. 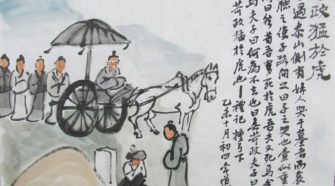