I thought that this was a healing, engaging, and thought-provoking essay.

An old man and his old dog, who died simultaneously in an accident, set off for heaven together.

As they were approaching, an angel suddenly appeared and stopped them. The angel said: “I’m sorry! Only one of you can go in. Do you see the road ahead of you? That road leads to the entrance into heaven. Whoever runs fast enough to get there first can go to heaven, while whoever loses the race has to go to hell.”

Upon hearing this, the old man told his dog: “Fu, you stay here and don’t move!”

After giving this order, he walked to the entrance to heaven.

The angel was very anxious. He bent down and said to the dog, “How can you be so silly? Hurry and catch up with your owner.”

The old dog looked patiently up at the angel with a simple look in his eyes that said, “I must obey my master’s orders.”

The angel looked at the old man’s back. He couldn’t help but shake his head and sigh.
He wondered why God would make such strange new rules.

This old man did not deserve to go to heaven.

Once the old man was one step away from entering the gate of heaven, he suddenly stopped, turned around, and shouted: “Ah Fu, come here quickly.”

When the old dog heard his master calling him, he was so happy that he jumped up and ran quickly to his side. Due to his momentum, the dog rushed directly through the gate of heaven.

The old man laughed and said, “That’s great! My dog can go to heaven.”

The angel asked, “Why did you do it this way?”

The old man said: “Since Ah Fu is so loyal, he always walks behind me wherever I go. The only way that I could get him into heaven before me would be to get him so excited that he would run ahead.”

The angel was very moved and decided to make an exception. He let the old man and his dog enter heaven together.

At this time, God also appeared and said to the angel: “This has taught you a lesson. One should observe the final result of others’ actions before judging them.”

Many misunderstandings between people are caused by individuals jumping to conclusions without waiting to see the results of others’ actions.

With more patience and understanding, there will be fewer misunderstandings and resentment between people.

Previous Kindness~ Not foolishness, but character

Next The Difference Between Calculating and Logical Thinking 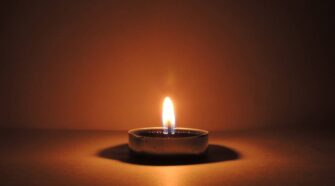