Confucius said: “Life and death are the matter of destiny, riches, and honor which lie in heaven.”

Once, Confucius was surrounded by soldiers in the city of Wei, but Confucius was still singing and relaxing in the room. Zi Lu (one of Confucius’s best students) asked Confucius, “Why does the teacher still have time to sing?”

Confucius said: “Let me tell you! I have wanted to get rid of poverty for a long time, but I still can’t avoid it, this is destiny. I sought understanding for a long time, but I do not get it because it was not the right time. There were no frustrated men in the time of Emperor Yao, Emperor Shun and Emperor Yu. (The legendary rulers of the Xia Dynasty during the 5th century B.C., regarded as Great Sage Kings based on their virtues and skills as leaders.) It was not because they were smart. In the time of Jie-Zhou (the last rulers of the Xia and Shang Dynasties, respectively, and used as references to tyranny), there were no proud persons, but not because people lacked wisdom. It was because of their situation. Knowing that poverty is fate and attainment needs time, facing catastrophe without fear is the courage of saints! I am walking along destiny, what can anyone do to me?”

On the fifth day of being trapped, a general came to apologize and said, “We mistakenly thought that you were a general who had harassed the city for the past few days. Therefore, we let the Master suffer. We ask for your forgiveness.” Then, Confucius and his followers were set free. 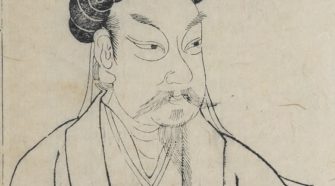 Getting Away From Habitual Thought–Zhuge Liang