The image is from Classroom | Synonym

Making a crisis into something favorable is possible. A crisis can also be a turning point.

A young man is determined to be a pastor.In the United States, if you want to become a pastor, you need to pass an examination, one of which involves public speaking.

The young man came half a month early to the testing center, and he stayed in a hotel room to prepare his speech. After he had written the speech, he read it aloud in the room every day, until he could even recite it backward fluently.

He was well prepared and full of confidence to take the test on the day of examination. He picked up a random number, sat down, and listened to the speeches by the candidates before him.

There was one person before him, and he was surprised to discover that the presentation of the individual on the stage was the same as his!
Looking more closely at the person, he realized that the man had lived the hotel room next to his.

There was no doubt that the candidate had eavesdropped on his loud reciting in his hotel room, and had then plagiarized his speech.
The student tried to suppress his anger and panic, desperately looking for a way out.

Suddenly, a light came upon him; he found a way.
He went to the stage calmly and gave his speech.
His speech was received with warm applause, and he passed the exam at the end.

How did he do it? Do you want to know how he did it?

This is what he said:
“To be a pastor, you need to be patient, able to listen, and capable of memorizing. I will now demonstrate that I can repeat the previous speech word for word. ”

He began to recite the speech that he had practiced diligently. His speech was more exciting than that of the previous candidate, and the audience gave him warm applause.

This serves as an excellent example of making a crisis into a favorable turning point. It is done by staying calm and composed to deal with it at a time of peril.

Next Prayer of Awakening Our Strength

Our hearts go out to Orlando… 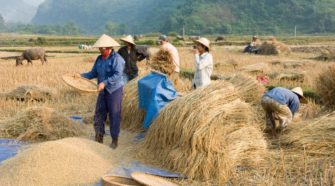