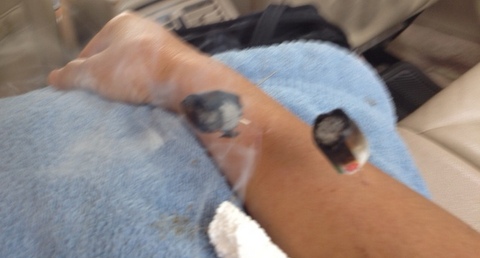 On Thanksgiving, 2013, in a blog post entitled, “Can You Imagine,”(http://loveneverending.com/?p=3377) I shared with you the story of how the unconditional love a kind doctor helped me to recover from a debilitating car injury. I never would have guessed that I would need to be saved again from the pain caused by that horrible crash. Nevertheless, this March I have once again found my cervical spine compression injury of C5/6 and 6/7 leaving me completely incapacitated and in need of a little unconditional love therapy.

Back in 2013 I pursued nearly every treatment option but surgery to help make the pain go away. I spent time doing acupuncture, massage, and physical therapy rehabilitation. In the end, my acupuncturist was the one who saved me. While I had hoped the pain would never resurface, there I was again, unable to move.

How could it be? Why did I find myself reliving this dreadful nightmare? My nerves screamed in pain with every breath I took. This time, as much as I wish I didn’t have to, the pain was so great that I resorted to taking pain pills.

This pain came to me during a long period of fasting. I was fasting to gain a better understanding of myself and to acquire a more compassionate connection to all that was going on in the world. All of a sudden, it was as if all of the pain that was being experienced by the people of the world began to flow through my veins, manifesting itself as the most horrific physical pain that continues to be with me even now. With this revisiting pain and discomfort came powerful waves of tears. I cried and cried, praying to God for some kind of relief. The only thing that seemed to help was laying in bed, motionless and focusing on complete relaxation.

Finally, I understand! I have to surrender to God. For three weeks, I fought hard to be still when all he wanted me to do was rest. He had to take away my strength in order for me to surrender. When I had no fight left in me, all I could do was pray. I prayed alone or with three or four friends 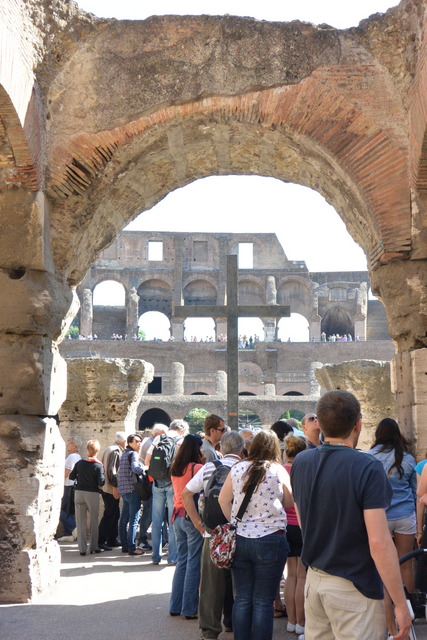 In prayer, I saw…
Jesus hanging on the cross.
He had been beaten, mocked, spitted upon…
He was weak, powerless and silently taking and swallowing all of humanity’s sufferings…

I had seen some of these visions before in my prayers. However, one thing was new. This time I saw Him bleeding to death. This image kept reappearing each time I prayed.

In prayer, my friend saw…
Three chariots carrying with them countless angels from above.
They circled around me.
She saw Jesus place a red and blue badge on my chest.
Then she saw a triangular mountain.
A clear sky was on top of the peak.

With these prayers and visions came indescribable divine, calm and peace. I began to pray for everyone in the world. I prayed that God would give me their pain. This same friend was once again moved into prayer a day before Easter. She knelt down and put her forehead on the floor and begged God to heal me. When I followed her into prayer I saw Jesus was crucified on the cross again.

Two days later, I was given the strength and motivation to go see the kind doctor who helped me heal from the same injury three years ago. From the moment I walked into her office, I knew she could feel my pain. Without hesitation she immediately took me back into one of her treatment rooms with one of her nurses to help.

As she placed the needles into my skin, I suddenly saw the angels that my friend identified in her vision. These angels were not the ones we associate with flying around in the sky with wings. Instead, they were friends and strangers there to help me in my time of need. How blessed am I to have so many angel friends surround me when I needed them most? As they breathed unconditional love into me, I suddenly came to a realization that there was a divine reason as to why I was subjected to so much awful pain.

I don’t believe that the timing of all this was just a coincidence. Indeed, God wanted me to understand the connection between my pain and the pain that Jesus experienced as he hung from the cross. He moved my friend into prayer for my healing the day before Easter. He placed visions of Jesus crucified in my head. He moved me to pray for those suffering in the world and for me to take away their pain.

The red and blue badge that my friend saw God put on me was a promotion, asking me to bring forward the love of Christ. He was asking me to put aside the small “I” and instead represent the bigger, “I,” the “I” of all of humanity. Every ounce of pain I experienced brought me closer to understanding the sacrificial love that He had for the people of the world as he hung on the cross for us.

All of a sudden, I became enlightened. Without going through this horrendous ache, I wouldn’t be able to understand His pain. I wouldn’t be able to feel his helplessness nor His unconditional love for the people. This is how He wants me to move to care for the bigger “I”…Indeed, He does not call the qualified, He qualifies the called.

Suddenly I burst into tears…
I saw the answer to a mystery that’s been haunting me ever since my husband died of cancer more than 15 years ago. After he had surgery on his neck, he kept bleeding. The wound wouldn’t seem to heal. I did not understand why he kept bleeding to his death. I thought such a fate was the privilege of Christ. Yet, through my own recent pain, I finally was awakened.My husband followed in the footsteps of the Christ. He also shed the blood for others, just like Christ did.

Finally, I understand why I have to experience this pain again. The first pain revealed the unconditional love of a kind doctor. This time God is leading me down a similar path that Jesus walked. Bearing the cross, step by step toward the end of His long journey. I experienced His unbearable pain while He walked the loneliest journey on earth.

He quietly and voluntarily took it all for us.
What price He had to pay.
What unconditional love He displayed for us.

I am so moved now and I can only cry out loud…and say
Thank you for this time of unimaginable suffering.
Thank you for letting me going through this dreadful, yet most worthwhile experience. Through this, I understand what unconditional love truly is. And more importantly, He continues to broaden my perspective…

We do not just live for ourselves.
We, too, should strive to live like He did, with unconditional love for the people of the world.

This image is from http://media.photobucket.com/user/agbearpictures/media/Pictures.jpg.html?filters[term]=jesus%20carrying%20the%20cross&filters[primary]=images&filters[secondary]=videos&sort=1&o=15 I think the following text from http://www.gotquestions.org/Lion-and-the-Lamb.html#ixzz3YXBwsrne describing the relation of Christ, Lamb and Lion very well. It is a perfect explanation of the image above.

“So when Jesus is referred to as the Lion and the Lamb, we are to see Him as not only the conquering King who will slay the enemies of God at His return, but also as the sacrificial Lamb who took away the reproach of sin from His people so they may share in His ultimate victory.”

Previous Zero Limits and I -Peace(Part 2)

Next The Voice-1: I Am in Your Heart

Applying Tao to My Life