At the end of the road, you can still keep going. Sometimes reaching that point makes you even stronger.

In the fields of Africa, sometimes you will see herds of antelopes start to run as lions and cheetahs start to chase them. Adult antelopes will lead the younger antelopes as they move, speeding like an arrow, towards steep mountains. Scientists often observe that the mountains that the antelopes run to are often very steep, bare, and jagged peaks. When chased, antelopes will head towards these places. As cheetahs and lions get close to them, the leader of the antelopes will leap away in a moment and lead the whole herd to the nearest mountain.

When adult antelopes run, they are like lightning, and even lions and cheetahs cannot catch them. Antelopes will simply keep moving, and even the cheetahs that dash are left behind.

Why would antelopes choose a steep mountain cliff when threatened? When a young antelope learns how to run, their stamina is not as great, and their ribcages are not well developed yet, constricting their breathing. Even if the young antelope runs as fast as it can, it can only jump forward about 3 feet at a time.

When a young antelope is lead by an adult antelope towards the mountains, with lions and cheetahs behind them, the antelopes face the cliff and no other way out. But because their bodies are very small and move fast, they will not injure themselves much on the jagged rocks as they move forward.

But the lions and cheetahs that chase them are heavy and large, and they often cannot catch up while on the rocks.

The young antelopes end up pulling their muscles because they are not yet developed but were needed for them to jump across the rocks. However, they recover quickly, and their jumping space increases as a result. The young antelope can now jump forward almost 4 feet at a time. Lions and cheetahs are unable to catch up with them. Through this, scientists finally understand why the antelopes give themselves a cliff.

You should give yourself and your life a cliff, and though it seems as if it is a dead end, it will improve you because that dead end might lead to a miracle or magic. Give your life a chance to make a miracle. Nature has its reasons as to why things are created the way they are. Lions are given strong, sharp claws to catch prey, but antelopes are given speed to escape. Adult antelopes lead young antelopes to mountains to develop them further so they can survive.

“Injury sometimes helps growth. Try to understand and get familiar with your strengths. To fully develop it will give you tremendous accomplishment.”

Previous Give Yourself a Cliff 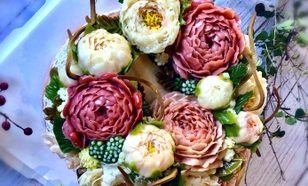