The image is from https://en.wikipedia.org/wiki/Central_Station_(film).

Last week, I wrote about everyone having their own time and their own pace, and that everyone is at the right place at the right time. Since then, I found articles on the Internet about the movie “Central Station,” and the story of how the director found the film’s lead actor.

The film centers on Rio de Janeiro’s Central Station, where director Walter Salles was approached by a nine-year-old shoe shiner named Vinicius de Oliveira, three weeks before filming began. But Salles was wearing white tennis shoes, which couldn’t be shined, and the boy asked him for money for food after being turned away, as he hadn’t eaten for the entire day. He also promised him that he would pay him back after a week. Salles gave him money and didn’t think much of it, knowing he likely wouldn’t be paid back, until he returned to Central Station to begin filming a month later, and the same boy waved him down and ran after him, to give him back the money he had borrowed three weeks earlier.

Salles saw something in the boy and told him that he had a gift for him at the studio. Rather than come alone, Vinicius brought all of the shoe shiners from the station with him to accept it so that he could share Salles’ gift with them. The director’s gift, however, was the lead role in his movie. Even if some of the other boys might have been better actors, he gave the role to the boy who had earnestly borrowed money from him, and who had brought his friends to share in the gift that he was to receive, because he could see the kindness and innocence in him that fit the character he was to play.

“Central Station” went on to receive international acclaim and win a Golden Globe for the best foreign-language film in 1999. A then twelve-year-old Vinicius went on stage with Salles and his co-star, Brazilian actress Fernanda Montenegro, to accept the award at the Beverly Hilton Hotel. For a boy who was working by the age of nine, who had never seen a movie before suddenly getting the chance to be the lead actor in one, it was the opportunity of a lifetime.

Previous Are You in Your Right Time Zone?

Next Whatever Our Heart Desires Will Come True 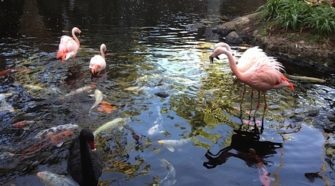