Before the Heaven and Earth existed
There was something nebulous:
Silent, isolated,
Standing alone, changing not,
Eternally revolving without fail,
Worthy to be the Mother of All Things.
I do not know its name
And address it as Tao.
If forced to give it a name, I shall call it “Great.”
Being great implies reaching out in space,
Reaching out into space suggests it is far-reaching,
Far-reaching implies a reversion to the original point.

This chapter came to me in May of this year, almost six months before I started to read and write about the Tao Te Ching and post it on my blog. Here is the story. I’ve been going to an audition site in Glendale, California for a long time, and there has always been a long picture hanging on the wall. I would stand there and stare at it, trying to figure out what the meaning of the picture was. I don’t know which artist painted it, but it is an interesting piece. You can clearly see a human face, and a hand is touching its lip. Recently, I happened to have an audition there, and I went there twice in one week. The second time was a callback. It was a large project; so many different people were waiting to go in for an audition. I had more than an hour to wait. I went back and looked at the picture again, and I got it. Just like what Lao Tzu said,

Now I know why this painter used clay to make a human face and hands. The face seems like a basket or pot. On top of the head, it looked as if roots were growing. Indeed, we are derived from the earth and are brought up by the earth. Of course, harvests are produced by the earth. We need the sun to give us light. The earth needs the sun to keep producing crops. It is all interrelated. With that, we can develop the Tao by following nature and the universe.

Eventually, man will go back to dust. We are buried, and decompose, and become part of the soil.

Before those four lines, Tao Te Ching also mentions the greatness of four things as they are referred.

Now I understand why humans can be great and powerful because we follow Tao, the universe, and the earth. Without them, we are nothing. Then there will be no greatness in us.

We are made in the image of God, but we cannot see him among humans. Just like that picture, from the eyes we can see wisdom, and that it is definitely in the shape of the human. And yet, the head was made of earth – made of clay. We are not superior to heaven, earth, or Tao. We are all part of each other. That is why, with this understanding, man, earth, the universe, and Tao can all be great together.

Next Applying Tao to My Life 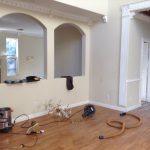 A Transition – from an Earthly Being to a Divine Being(2)