Confucius once passed by the foot of the Tai Mountain. There he saw a woman crying her heart out beside a newly finished grave. The Master stopped and listened. Then he sent Tselu over to inquire of the mourner, saying, “Your cry as if you are in great sorrow.”

“True!” the woman answered. “First my father-in-law was killed by the tiger; then my husband was killed by the tiger, and now my son – he also died at the mouth of the tiger.”
“Why, then,” the Master asked, “didn’t you leave the place and go somewhere else?”
“But there is no tyrant here!” was the woman’s reply.
Confucius turned to Tselu and said: ”Mark it, my lad! A tyranny is fiercer than a tiger .” 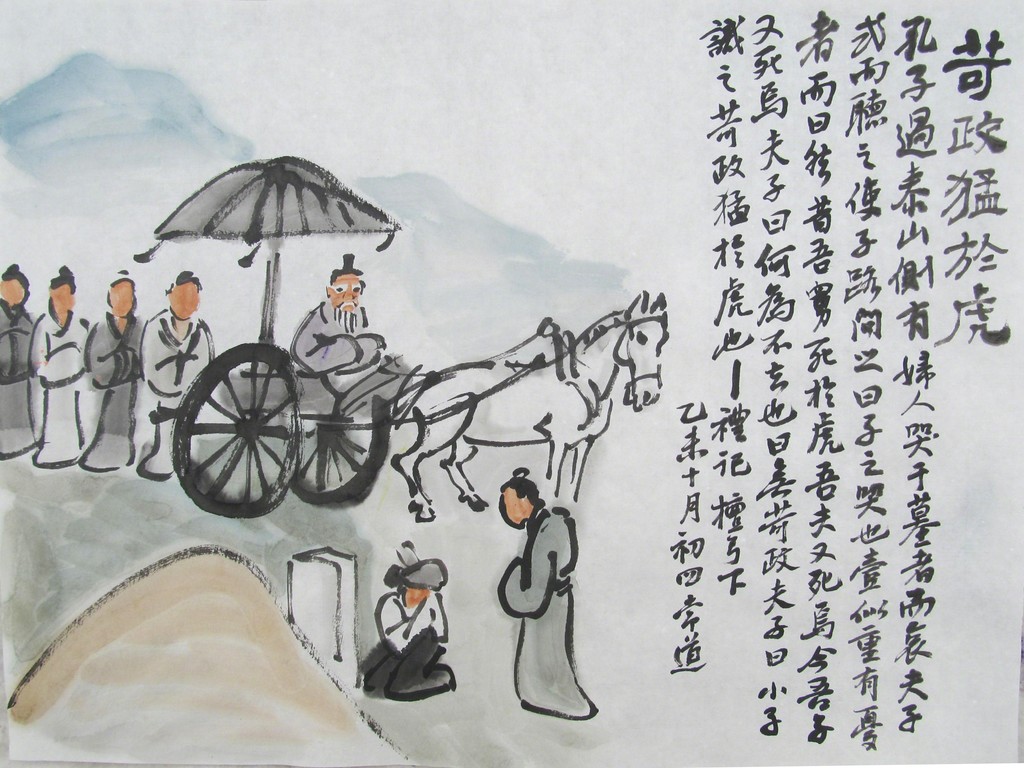 The image is from Wang Bingfu 王秉復| A Series of Fables: Tyranny is Fiercer than a Tiger 寓言故事系列：苛政猛於虎(2014-2015) |

The conception of this chapter is the same as that of “Tyranny is fiercer than a tiger.” Lao Tzu criticized the rulers for improper administration from the perspective of heavy taxes, various government orders and extravagant corruption of officials at all levels, and exploited the evil deeds of the people.

This chapter is the continuation and development of the idea of “If men are not afraid to die, It is no avail to threaten them with death.” and “The people’s hunger is due to the excess of their ruler’s taxation. So they starve.” in chapters 74 and 75, which express Lao Tzu’s hatred of the rulers’ harsh policies and his sympathy for the people’s hardship.

Lao Tzu concludes that those who are in power put the people’s interests before their own are far superior to those who do not.

Previous The Artist Knows What Is Real Happiness