Orchids’ first association with humanity was said to be made by Confucius, as he said in Confucius’ Family Dialogue:  “The orchids let out their fragrance even if there is no one around to appreciate it. Likewise, men of noble character will not let poverty deter their will guided by high principles and morals.”(In Chinese“芝蘭生於森林, 不為無人而不芳, 君子修道立德, 不為窮困而改節.”)

On several occasions, Confucius expressed his deep love of orchids. He even called these magnificent plants the “King of Fragrance”. He, also along with many Chinese scholars, wrote numerous poems about orchids. The elegant appearance, the fragrance and the character of the orchids attract people to admire them and stand in awe of how they appear in this world.

Every year, at the beginning of March, there is an international orchid show in Santa Barbara. As I was told, it is the biggest one in the state.  I was overwhelmed by the displays when I paid a visit to the orchid show there the first time many years ago. There were thousands of beautiful orchids there for the people to enjoy. I love orchids so much that I try to go every year. On my blog, I have also written a few articles about orchids. Here are the links to  these articles:

As you can see, I wrote about the wisdom of orchids. A third of orchids use a deceptive method to become pollinated. They are truly the most fascinating plants in this world. While I was thinking about this, I was reminded of the story about orchids and Charles Darwin. 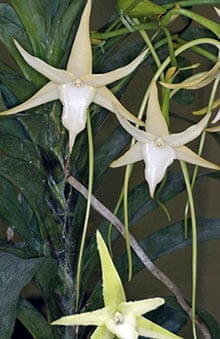 The beautiful flowers of the orchid A. sesquipedale with the long, green nectaries hanging behind them. Photograph: Ardetti et al, 2012

According to Dr. Dave Hone in an article published by the Guardian, around 150 years ago, Charles Darwin was sent a box of orchids with the exceptionally long nectaries and hypothesized that there must be some insect with a very, very, very long tongue that could pollinate it. After all, if such an insect did not exist to pollinate the flower, how could it have survived all these years? However, no such insect was found until 1907, when a subspecies of an African Congo moth was found with an exceptionally long tongue span in Madagascar, where the orchids grew freely. In 1997, it was finally confirmed that the moth pollinated the orchid, as a scientist taped this interaction. Orchids are truly amazing, having coevolved with this moth to survive in our world.

Please enjoy the pictures below of the 71st Santa Barbara International Orchid show! Next Jokes and An Inspiring Video

A Page before “ My Life Story”