Taking ownership over our own lives is perhaps the single most important thing we could do for ourselves, yet it’s often the most neglected aspect of our lives. Oftentimes we end up giving away ownership without even realizing it. If I were to write a second book, I would devote its entirety to the concept of ownership. But for now, I’m going to share with you an example of a time when I lost ownership in my own life and how once I was able to identify such a significant loss, I was able to mend parts of me that I thought were permanently broken.

Three years ago I was in a car accident that left my fifth, sixth and seventh disks in my neck completely collapsed. After the recovery, I thought I had healed completely, but then, three or four months ago, I began to suffer terrible nerve pains in my back. The pain was worse than even shingles, which believe me if you’ve never experienced them, are horrible. I spent months lying down, doing absolutely nothing. I found that, despite the boredom, lying down was best for me because it restricted the amount of pressure I placed on my back.

I went through a lot of treatments, such as physical therapy, chiropractic treatments, acupuncture and PRP treatment (Platelet Rich Plasma Phototherapy is used to treat acute or chronic musculoskeletal injury or pain). It seemed that, no matter what I tried, I still suffered huge amounts of pain. In May, I remembered that I had registered to attend a very important writer’s workshop. Attending this workshop would enter me for a chance to win a literary contract with a well-known and well-respected book publisher. The chances of winning were slim, but I still wanted to put forth a valiant effort. However, I did know whether or not I would be able to handle the flight and perhaps quite uncomfortable stay in the faraway land of Maui. My daughter was worried that I would not be able to handle it, so she asked that I first spend some time resting at her house in Oahu before heading over to the workshop in Maui. I took her advice and flew to Oahu first. For four hours, I was having a hard time because I had to sit straight on the plane. When I arrived in Oahu, my son’s friend invited me to a meditation. Luckily I could lie down, so I was able to finish the meditation. As soon as I got back to my daughter’s house, I was overcome by an enlightening thought: I had to find a way to help myself, to get out of this situation and to set myself free. This pain had been with me for too long.

Although I had made it to Oahu, I now had to find a way to manage to attend the workshop in Maui, without needing to lie down during the classes. I once heard someone say that whatever you focus on is going to persist. I used these words as my mantra throughout the remainder of my time in Oahu, deciding that if were to successfully make it through the workshop, I would need to pay no more attention to the pain in my back and shoulder. From that moment on while staying at my daughter’s house in Oahu, I stopped focusing on the little things, and instead began to focus on the larger sense of self – that is, me as a whole. Every day I would walk for one hour early in the morning back and forth from the beach. In the evening, I would do the same. I added swimming on top of that in the evenings. And then, just like that, I experienced a miracle: all of a sudden, as I focused on the overall health of my body, my back pain began to bother me less and less.

It dawned on me that these two or three months I had been overcome by my pain and it was because I had completely lost ownership of my own body. For two months, I was lying and giving ownership to the pain. My children, all of my friends would call me every day and ask me how my pain was. “Pain” – this word just constantly rang in my ear. Little did I know, I had surrendered myself to this pain all these months. Fortunately, while I was in Hawaii, I started to quiet down and think about a solution. All of a sudden, I realized the only solution that would prove to be effective would require me to regain ownership of my health. When I went to Maui, I did the same thing that I did in Oahu. Every single break I could get, I would walk back to my room and relax to restore my health. Again and again, I focused on the health of my whole body – not just my back. Once I began to reclaim ownership of my health, I was able to sit through two full and a half days of the workshop. Some would call that, well…a miracle.

Next Joke and Funny Video 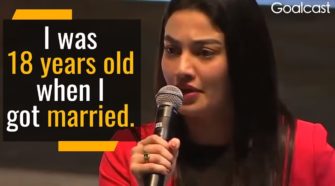