The image is from Realization.org.

There was a carriage in the yard. Osho said to his disciple: “Go, take the horse away.”

Osho said to him again: “Go, move the cart down and put it in the room on the left.”

Osho told him again: “Go, take the rut and put it in the right room.”

Osho again to the disciple. Said, “Go, remove the wheel and put it in the middle of the room.”

In the courtyard, where the carriage had stopped, there was nothing left anymore. Osho asked the disciple: “you took the horse, the cart, the shaft, the wheel, but never the carriage. But that is odd. You did not take the carriage, but it is gone. Where is the carriage?”

Each item the disciples took was not a carriage but altogether made a carriage. A carriage is nothing but a horse, cart, shafts, and wheels. Separately, the parts are not equal to a carriage, but the essence of a carriage is in them. All things are visible but can be unknown, but we can see and know them by seeing correctly.

Next A Mountain is Just a Mountain 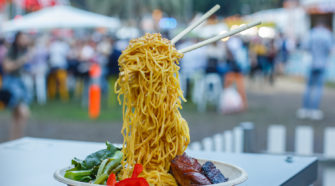