Stretch (a bow) to its very longest,
And you will wish you had stopped in time.
Temper a (sword-edge) to its very sharpest,
And the edge will not last long.
When gold and jade fill your hall,
You will not be able to keep them safe.
To be proud with wealth and honor
Is to sow seeds of one’s own downfall.
Retire when your work is done,
Such is Heaven’s way.
(Translated by Yu Tang Lin)

What is Heaven’s way? That is the way of the Tao.
Never hold anything to its fullest because it will overflow, and then you lose more than you gain.

If you keep showing off your ability; you will lose support from your colleagues and success will not last long.

When gold and jade fill the halls, their possessor cannot keep them safe. Gold and jade are mere worldly possessions which come and go. Virtue is more important than external property.

When wealth and honors lead to arrogance, this brings evil upon that person. Because they invite criticism and jealousy from people, it ignites the beginning of a curse.

When your work is well done, and your name is becomes well-known, to withdraw into obscurity is the way of Heaven.

Here Lao Tzu taught us how to practice ” Tao” in our life. Never do anything extreme and find the balance instead, because the balancing is the Tao. I love this story from Osho. It shows us how to gain balance.

Here is excerpt from Osho-Tao: The Three Treasures, Vol 1 Page 70 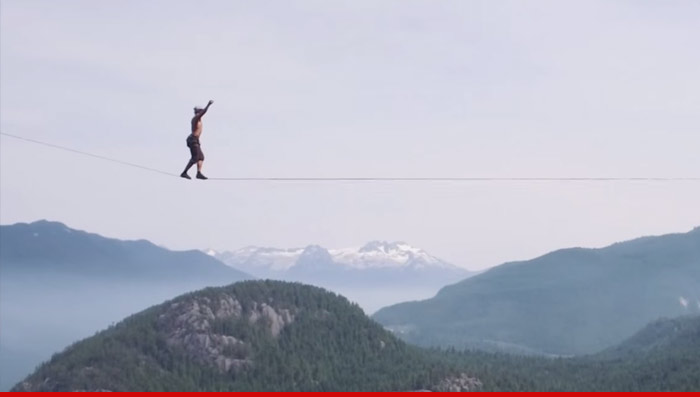 Life On The Line — Man Walks Between Peaks

I have heard:
Once, a great king had to make a decision that was against his heart. Two of his ministers had committed some crime, and he loved the ministers very much. Even if they had committed the
crime, he wanted to forgive them; his love was such for them. But that was against the law of the country, and it wouldn’t have been a good precedent. So they had to be punished. And the law of
the country said that for the crimes they committed, the only punishment was death. So what to do?

It was too difficult to decide, so he found a way out. He said, ”They have to be sentenced to death, but I will give them one more chance to live. Between two hills a tightrope will be stretched. If they can walk over it and survive, then I will forgive them.”

It seemed almost impossible. It was impossible because the ministers had never walked on any tightrope, let alone on one between two hills over a big valley – there was death everywhere. And to walk on a tightrope is a great art, one has to learn it for many years, and it is a great discipline. They had not even dreamed in their lives that they would become tightrope-walkers.

One of the two couldn’t sleep. The whole night he prayed to God to help him. He couldn’t take his tea in the morning. He came to the place where this phenomenon was to happen; the whole capital
had gathered.

The other, knowing well that he didn’t know anything about tightrope-walking, that nothing could be done and it was almost certain that he was going to die, so why not sleep well? He slept. In the morning he took his usual tea. He walked leisurely to the tightrope that morning. The other was trembling and feverish, but he was quiet and calm knowing well that death was to happen – and when it is certain, why bother? Die silently.

He started walking on the rope, and wonder of wonders – he walked!

Nobody could believe it! Even the tightrope-walkers had come to watch – even they could not believe it. It was difficult, even for them – the distance was too great, and the danger was too much. One step wrong, a little too much leaning towards the left or the right and you are gone; become a little unbalanced and death is waiting at every step. But the man walked, and he walked as leisurely as if he had gone for a morning walk. He reached the other hill.

The first man was trembling, perspiring. He shouted from his place to the other man, ”Please tell me how you walked, so I can also walk!”

The other man shouted back: ”It is difficult to say because I don’t know how. I know only one thing – this is the way I have been walking my whole life. I’m not a tightrope-walker, but now I know I am because this is the way I have been living my whole life – balanced, never going to the extreme. Or, if I lean towards the left immediately I balance it by leaning towards the right. I have not done anything else. But this won’t help you because this is not something you can learn suddenly. If you live in this way, it comes to you.”

Yes, never go to the extremes – to the fullest and sharpest… Be in the middle and be in the balance for that is skill and that is Tao. That is eternal.

Next Civilization - To Be In Another's Shoes