I have undergone so many trials. Whenever something happened to me, it reminded
me of Job in the Bible. Job was a righteous, devout, faithful man. God allowed Satan
to afflict Job to test his faithfulness. As a result, many tragedies were visited upon
Job. In the end, however, God blessed Job with twice as much as he had had before
his trials began. One thing that sticks in my mind was that even though God put Job
in the hands of Satan, He stipulated one condition: that Satan must spare Job’s life.

Yes, Job’s life had to be spared. Then, after his trials were over, he could bear
witness for God and receive His double blessing. It was wonderful that it never
occurred to me to kill myself even when these trials came upon me, one after
another, nonstop. I knew clearly, as a mother, that I had no choice but to live. Yes,
sometimes it might have felt like a bomb exploding in my heart, breaking my heart
into pieces, but I had to live. So I went on with my life. Remaining alive, I was able to
experience results I had not anticipated and thus learn whether it had really been a
“bomb” or, rather, a “blessing” in disguise.

Let me tell you why I use the shocking word “bomb.” After my husband passed
away, I went to his office to clean out his things. I found a box in his bottom drawer.
It contained a ring and a picture of a girl. I was stunned by my discovery. Sitting there, I felt as though the earth had stopped turning. I felt numb. How I wished I were non-existent! How I wished I had not been born! “I wish… Oh, my goodness, I wish …” I did not know what to wish. My whole being was frozen. My thoughts were frozen. “Oh God, please help me….”

What I soon realized I wished for was that my late husband could come back to life, if only for five minutes, so I could ask him what was going on. Of course, it was impossible for him to come back, and then suddenly, awakening from my paralysis, I had an idea –the best way to get to the bottom of the mystery would be to ask my husband’s best friend for details.

I went all the way to Canada to see him, only to receive this reply: The girl was their high school classmate. He added that whoever came to the United States first would suffer. He implied that I came to the States first and married his friend, so I suffered. What a cruel thing to say! He was unkind, and he did not want to give me any details. No matter how desperately I wanted the truth, I could not get it. He had no empathy; my hope to get to the bottom of the issue vanished.

Returning to Boston, I knew I had no one but myself to rely on. I thought through the whole incident. Apparently, my husband had intended to propose to that girl, but I got here before her, so he married me instead. He never gave me any sign of having another girlfriend. He apparently knew I would have left him if I ever found out.

Why did it happen? After analyzing our interaction, I calmed down, and I could not blame him for what he had done. A month before he departed for the U.S. to begin graduate studies, we had been quarreling all the time. It was because my parents did not approve of our relationship. I felt pressure from my parents and passed it on to him. Maybe he could not take it anymore and tried to find a way out by finding a new girlfriend.

The past is past, and I told myself that I had to let go of this agony. I needed to deal with it so my children and I could get on with our lives. One Sunday I locked myself in my room and for the last time read his diary, which detailed our activities when we were together at the university. I read and read … I cried and cried. And then I burned it. I said good-bye to my husband, good-bye to my past. And I felt relieved. But still this bomb had exploded and broken my heart in pieces. If I had not had this marriage, I might have spared myself all these hardships. I felt sad and tried to escape my torments. At this time, we were looking to buy a house. I started to notice a change in my daughter following her father’s death. She told me I did not need a house with a family room. I asked her why. She told me it was because we were not a family. I suddenly realized that her schoolmates were teasing her because she did not have a father. I needed to come up with a solution.

At about this time, some friends from New York came to Boston and wanted to get together with me at a Taiwanese Association meeting. I had not been going to any social activities since my husband’s death. But to see my friends, I ended up joining their dinner party. There I met a man, Ming, who later became my husband. He was two years older than me. We had met earlier at the university in Taiwan. He then got his Ph.D. in Canada and was doing a postdoctoral fellowship at Harvard University at the time we met again in Boston. He was kind, considerate and had a big heart. He loved me very much and accepted my children as his own. I thank him for giving my children a loving, trusting and reliable father. 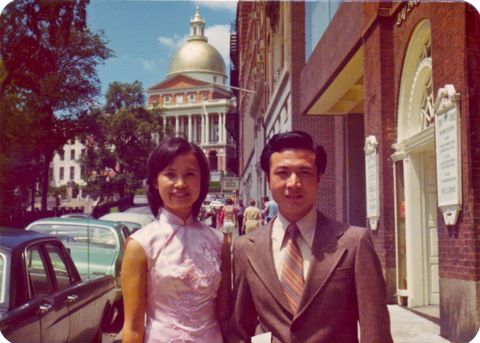 So is it a bomb? Or is it a blessing in disguise? I am grateful that I did not surrender to all my trials and give up my life. I gave myself a chance to see whether it was a bomb or a blessing. Just like Job, who lived to receive a double blessing from God. I thank my late husband who gave me a present – a box with a ring and a girl’s picture. He helped me to get out of my own box and let go of him so I could have a life of my own for my children and myself.

Next My Life Story (5): Infinite Life